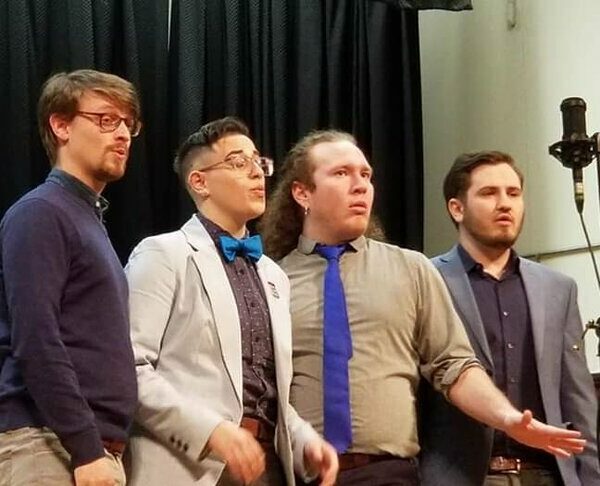 Mia Andor Baz (they/them) is a member of the Barbershop Harmony Society (BHS), singing competitive barbershop-style a cappella music. They moved in with their quartet, Hot Second, in August. While barbershop conventions have been canceled this year, Hot Second is participating in a reality show and charity fundraiser called Barbershop Royale, raising funds for the Ali Forney Center (link to donate below). Hot Second will be livestreaming a concert from home (“The Hot Spot”) later this year — like them on Facebook for updates!

Baz is also a member of the BHS Hell’s Kitchen chapter choruses, Gotham (SATB) and Sirens of Gotham (SSAA). Both choruses are producing content to release this winter.

In October, Baz served as a panelist for the first installment of the BHS’s Inclusion Webinar Series, “Gender identity, LGBTQ+, and Barbershop” to speak about their experiences of inclusion and exclusion as a transgender nonbinary person in as-yet gendered singing organizations. You can watch the recorded webinar at the link below.

Hot Second Quartet, “If I Had My Life To Live Over”: https://www.youtube.com/watch?v=B-mIR0gbqWs