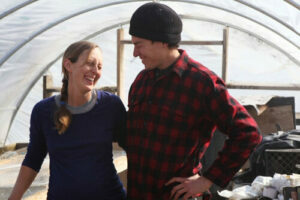 We’re delighted to introduce Jon Ronsani as our new farmer at Katchkie Farm, our 60-acre organic farm in Columbia County, NY. A New York native, Jon brings nearly 15 years of Hudson Valley farming experience to Katchkie, including the stewardship of his own 45-acre Lineage Farm from 2011 to 2017.

“Jon’s love of farming is palpable and his background in small scale produce-oriented farming is the perfect fit for Katchkie,” notes Liz Neumark, the founder and CEO of Great Performances, who bought the then unfarmed land in 2006 and has been “growing” a farm on it  ever since. “His experience is also a great fit for The Sylvia Center, whose teaching garden on the farm he will oversee.  We look forward to Jon further integrating the farm’s yield into Great Performances’ kitchens by working closely with the culinary team to tailor the farm’s production to their always evolving menus.”*

About taking over the helm of Katchkie Farm, Ronsani enthuses, “It’s very gratifying to be working with someone like Liz, who is so emotionally invested in farming, and with the people at Great Performances in general, who are so passionate about what they do.”

A graduate of Bard College, Jon studied music performance with the goal of being a musician. After graduating from college, Jon Ronsani volunteered for Hudson, NY’s Threshold Farm’s CSA program where he discovered that his lifelong love of food gave him a deep-seated connection to farming. When his fellow volunteers returned to school that autumn, he was offered a full-time farming job that provided him with a diverse journeyman’s education in the business of farming from mechanics and marketing to soil nutrition and dealing with customers.

He started a CSA at his Lineage Farm, which he folded into Liberty Farm’s business when he joined that operation in the interests of more stability for his growing family in 2017. He and his wife, Jen, who is his farming partner, are the parents of two young boys.