Once again over the past 10 years working at the Plaza, almost every client or guest I have met has mentioned their unique experience at Trader Vic’s. One common thread of gossip was the deadly drinks—the Polynesian-themed bar with the potent rum-based cocktails that created some memory lapses in the evening dinner.

The birth of Trader Vic’s was in Oakland, California in 1934. The original restaurant was named Hinky Dink’s by the owner Victor Jules Bergeron. Three years later the restaurant turned into the famed Chinese food with the gigantic Polynesian drinks. For decades, Trader Vic’s served that combination without updating their menu. I assume why fix something if it works and is a huge smash hit?

Trader Vic’s made its first debut at the Savoy-Plaza Hotel, the site of the GM building across the street from the Plaza. In 1965 Trader Vic’s moved into the basement of the Plaza hotel replacing the Turkish baths. Celebrities, movers and shakers lined up for reservations from day one. Jacqueline Onassis, Richard Nixon and Salvador Dali, to name a few, enjoyed famous watering hole until the doors closed after 28 years in 1993.

To this day guests have asked “Where is Trader Vic’s? Will it come back? When will it reopen?”. I hope investors are reading my piece and think about a second debut of Trader Vic’s—New Yorkers are asking for it. 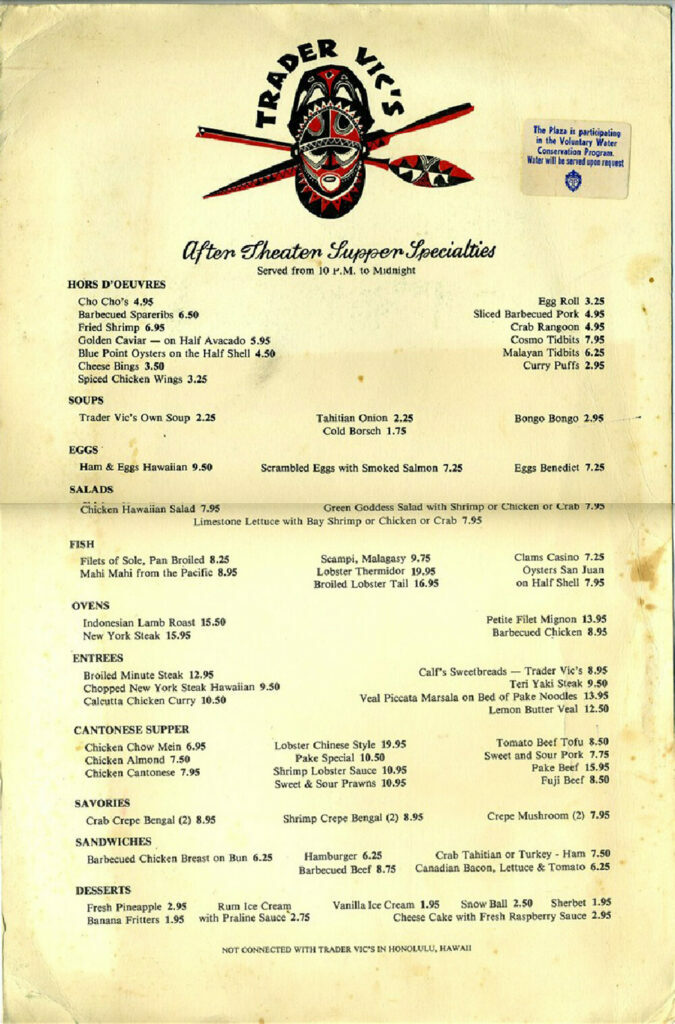 A favorite excerpt from NY Eater, “During its heyday in the late ’60s and early ’70s, Trader Vic’s was a popular hangout for prep school kids and their parents. Entertainment writer Nikki Finks remembered her experience at Trader Vic’s, ‘When I was growing up, my gang’s local diner was Trader Vic’s at the Plaza. A typical evening out meant going to the Paris Theater, across 58th Street, to see an art movie and then inside the hotel for a pupu platter. (It would be years before I realized that most films didn’t have subtitles, or that this restaurant served entrees.) I can attest that Trader Vic’s was the ideal setting for a first date between two sophisticated teenagers. There was so much loopy Polynesian tiki décor to make fun of that we never ran out of conversation.’”