Where were you born?

How did you get involved in the not-for-profit world?

Community service and activism were a constant in my childhood. My family was involved in helping to desegregate housing on Long Island. My mother volunteered as a teacher’s aide for preschoolers with Down syndrome and when they were short staffed I would help out and play with the children. We moved to Greece for two years, just in time to experience the military coup of 1967. My parents ended up printing the only underground free press and helping dissidents leave the country safely. Less than two years before my father died at age 85, he spent a night at Zuccotti Park with the Occupy Wall Street movement.  Clearly, with a tradition of engagement, of acting on one’s beliefs deeply ingrained in me it’s no surprise that my original career choice – and where I’ve ended up though I took a few detours – was nonprofit, social service related. 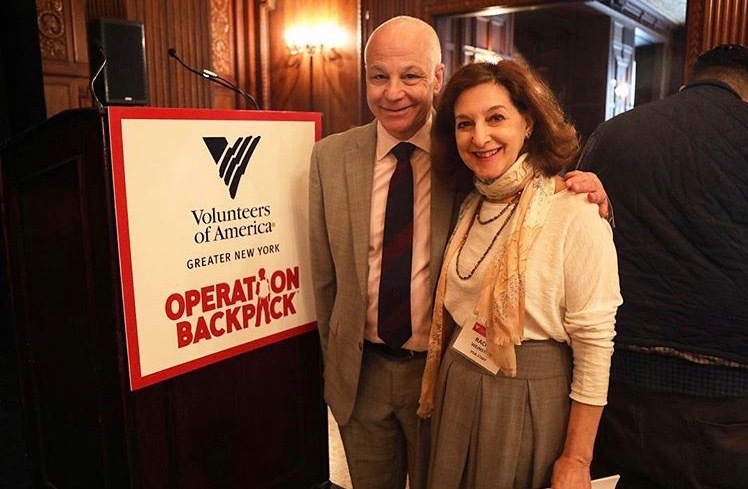 When did you first feel like a true New Yorker? What was a defining moment for you?

I think when my daughter was born, wheeling her in her carriage and people being so kind to a new mother with a baby, holding doors, cooing at her, feeling all was right with the world those infant through toddler years.

Who is the smartest New Yorker you know?

My dad was the smartest New Yorker that I knew. If anyone had a question in my office no matter whether the subject, we’d say, “call Rachel’s dad”. I don’t know if there was a topic – no matter how obscure – that he could not discuss knowledgeably and thoroughly. He had so many interests from WW1 history, Greek mythology and the voting record of every living politician, to Frank Lloyd Wright and the Arts & Crafts movement, Apple computers and the great English and American poets.

What do you think are the key ingredients to a successful gala?

It needs to be inspiring, fun and end on time. Guests need to feel special and appreciated by the charity they have come to support.

What is your favorite New York Moment?

I’ll never forget the blizzard of 1996, sledding down the middle of West End Avenue with my then three-year old daughter! Not a car in sight, half expecting a horse-drawn carriage to reveal itself instead.

What do you love about The Plaza?

Aside from the grandeur and old world beauty of The Plaza itself, the central location and the fact that our gala attendees look forward to coming to this grand venue year after year, I love that I am treated – that Volunteers of America is treated – like family here. The banquet captain remembers me and of course Mike and Rob are incredibly attentive and invested in ensuring my event is flawless. When I moved our annual event to The Plaza I planned to take it to a different venue the next year so as to keep things “new”, but eight years later we’re still here and it doesn’t feel old. Instead it feels “familiar” as it would if you were looking forward to returning home.

If you could have dinner with 3 people tonight, living or passed, who would you choose?

What is your crowning achievement at Volunteers of America?

Personally? I’d have to say my most impactful contribution to the organization and by extension, the NYC community, is our signature community service campaign, Operation Backpack® which puts new, top quality backpacks into the hands of every child who calls a New York City shelter “home”. This year we gave 20,000 backpacks to children. And these backpacks are ones we would put on our own kids’ backs. Over 300 NYC companies contributed to the success of this year’s campaign including The Plaza which hosted our Operation Backpack® kickoff breakfast.

Tell me more about Operation Backpack

Imagine being a child who is homeless whose family does not have the means to buy you all the supplies on the list your school has sent you. Most children who are homeless try to hide the fact from their classmates but if they walk into class empty-handed, counting on a teacher to outfit them with supplies, the other children will see this is a child in need and the stigma around being poor or homeless is a great burden to bear. The beauty of Operation Backpack® is that our backpacks are in the children’s hands before school begins so they can walk in on day one looking and feeling more like their classmates and less like a child in need.

What book are you reading now?

“The First Bad Man” by Miranda July. Lately, I get most of my best book recommendations from Madeline, my 25-year-old daughter.