Explore Great Music, Art and More at Our Partner Venues This Month!

Tonton Pal and Biguini Bakhaga are Malian singer-songwriters. Their style of music are Mandingo (DJELIYA) sound and live band who will truly have you entertained.

In her Apollo debut, Sangaré, “The Songbird of Wassoulou,” will perform music that spans traditional Wassoulou music to contemporary sounds coming out of Africa as well as songs from her recent critically acclaimed album, Timbuktu.

As an activist, businesswoman and global icon, Oumou Sangaré is considered an ambassador of Wassoulou; her music has been inspired by the music and traditional dances of the region. She writes and composes her songs, which often include social criticism, especially concerning women’s low status in society.

Drawing comparisons to legendary performers such as Grace Jones, Nina Simone, and Aretha Franklin, Sangaré has been praised by stars including Beyoncé and Alicia Keys for her powerful voice and unwavering commitment to the betterment of women.

This concert is presented as part of Apollo’s Fall 2022 Season as well as WMI’s WOMEN’S VOICES series celebrating the role that female artists play in the preservation and promotion of their respective cultures and traditions.

Gisèle Vienne stops time in this hypnotic work that’s captivated audiences from Tokyo to Sao Paulo. The acclaimed French choreographer transports us to a rave, conjuring up a cinematic fever dream, a sacred ritual, and a night spent losing oneself in the crowd. The air throbs with pulsing beats from the radical EDM artists of 90s Detroit. Time ebbs and flows, capturing a moment of explosive synchronicity or slowing down to illuminate the tiniest movements, as 15 individual stories emerge and are subsumed by the group.

Showcasing Vienne at the height of her artistic power, CROWD makes its US premiere at BAM in a rush of collective euphoria and creative transformation.

No book has captivated and moved millions of readers during the past few years like A Little Life by Hanya Yanagihara.

In this epic, worldwide bestselling novel, shortlisted for the Man Booker Prize and the National Book Award in 2015, the complex relationships between four ambitious friends—a lawyer, an actor, an architect, and an artist—unfold over more than three decades. Adapted for the stage by celebrated director Ivo van Hove, this harrowing story follows them from college into the pressures of middle age in New York City. Jude, the troubled protagonist, is an introverted lawyer. Intense friendships are everything to him. Fearing intimacy as much as he hungers for it, his physical and mental well-being are at stake. The book and the play, both requiring total surrender, test the profound limits and potential of love.

From its mud-splattered, rain-soaked opening, Thomas Ostermeier’s Hamlet delivers on its reputation as one of the great interpretations of Shakespeare. Pop music, drag shows, and courtly duels coexist in riotous harmony in the German auteur’s legendary production, which finally comes to New York after traveling the globe to international acclaim. Cult Shakespearean star Lars Eidinger (Richard III) gives an unforgettable, no-holds-barred performance as the Dane, gliding between Hamlet’s famous soliloquies and raucous improvisations as he swears, schemes, and videotapes.

With the uncompromising vision that earned him the Venice Biennale’s Golden Lion in honor of his body of work, Ostermeier returns to BAM to bring new meaning to mad genius.

Tickets: free and open to the public

Swing by the Museum’s backyard Sculpture Garden for performances by some of the city’s best musicians, and enjoy a range of creative styles incorporating blues, jazz, and international sounds. Presented in partnership with Jazz Foundation of America.

In October, Cuban jazz pianist Axel Tosca leads a trio that blends progressive jazz, Cuban timba, and R&B, with a dash of hip-hop. For this event they are joined by Tosca’s mother, famed Cuban trova singer Xiomara Laugart. A founding member of the renowned Latin fusion band Yerba Buena, Laugart also played the lead role in the 2007 off-Broadway musical Celia: The Life and Music of Celia Cruz.

Presented in collaboration with City Winery

Kat Wright — with a voice both sultry and dynamic; delicate, yet powerful; gritty, but highly emotive and nuanced — has been described as “a young Bonnie Raitt meets Amy Winehouse.” Following her appearance at Caramoor’s American Roots Music Festival in 2021, the Burlington, VT, artist returns with her band for an evening of original music and soulful covers.

Young artists from Caramoor’s Evnin Rising Stars program perform in a pair of concerts for which the program’s guest Artistic Director, cellist Marcy Rosen, is joined by distinguished artists Joseph Lin, violin, and Steven Tenenbom, viola. In their first concert, the young instrumentalists perform Haydn’s String Quartet in B-flat Major; Brahms’ String Quintet in F Major; and Dvořák’s Piano Quartet in E-flat Major. One of three mentoring programs at Caramoor, Evnin Rising Stars serves as an incubator for the next generation of classical musicians. 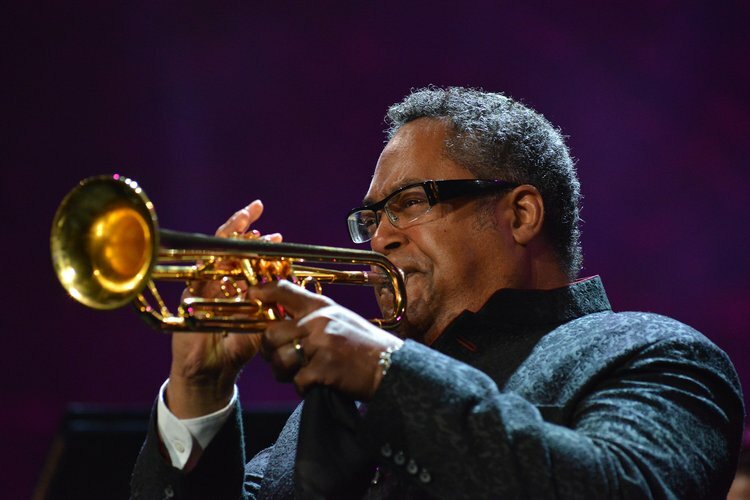 “He’s the best ever. Including me!” – Dizzy Gillespie, on Jon Faddis

Who better to honor Dizzy Gillespie on his birthday than his protégé, Jon Faddis, Dizzy’s life long hero, collaborator, bandmate and friend. For this occasion, Faddis has selected to tackle “Gillespiana” – the wide-ranging musical tour-de-fource that showcased Dizzy’s range and soul. The five song suite, composed by Argentine pianist, composer, arranger and conductor Lalo Schifrin specifically for Dizzy in an orchestral/big band setting, certainly is jazz, but also informed by classical and Latin music. It also does not have a sax section, but does have such instruments as tuba, french horn, congas, bongos and more. Prepare for an exhilarating ride, led by one so intimately familiar with this masterpiece.

Rufus Reid has long been one of the world’s top bassists. He’s toured and recorded with Stan Getz, Kenny Burrell, Nancy Wilson, Thad Jones and Mel Lewis, Dexter Gordon, Benny Golson, and countless others. Reid is increasingly stepping into the spotlight as a bandleader, and this new band is truly remarkable–a quintet made up of world-class soloists that will blow you away at each set.

Poster House Members are invited with a guest to a private tour of Masked Vigilantes on Silent Motorbikes led by curator RJ Rushmore. This exhibition showcases fine and street art that incorporate advertising posters, repurposing and blurring their intended mass communication. See how renegade artists take the powerful visual language of posters, twisting and reimagining them into critical social commentary.

Spooky Season is in full effect, and, for one night only, Poster House is turning into Horror House! Inspired by the exhibition Masked Vigilantes on Silent Motorbikes where artists take elements from posters and reinterpret them into new works, this program will have you draw from classic horror movie posters to create your own Halloween-themed lanterns. Shed some light on your own creation and join us for this fun, interactive activity!

PH x Teens: Horror House is a drop-in program for young adults ages 13 to 18. Advanced registration is required but participants are not expected to stay the entire time; guests should plan to spend about an hour on this interactive, self-guided activity.

The season kicks off with Pulitzer Prize-winner Quiara Alegría Hudes’s return to Signature for the second play in her Premiere Residency (following the 2016 world premiere of Daphne’s Dive), the stage adaptation of her memoir My Broken Language. The world premiere production, directed by Hudes and colliding monologue, literary reading, music, and movement in its depiction of an author growing up in a Puerto Rican family in Philadelphia, continues a momentous moment for the playwright: in 2021, she released the acclaimed book on which the play is based, and her Tony-nominated stage musical collaboration with Lin Manuel-Miranda, In the Heights, reached audiences around the world as a beloved major motion picture. (Hudes penned the book in the Broadway production and the film’s screenplay).

“An arty quartet … mixing ideas from jazz, new classical, and Appalachian folk” (The New York Times), The Westerlies is composed of childhood friends Riley Mulherkar, Chloe Rowlands, Andy Clausen and Willem de Koch. Their Wave Hill program titled Wherein Lies the Good is a bold and ferociously unique vision of brass, as works originally written for string quartet, solo piano and the human voice are reinvented through their kaleidoscopic lens.

In this special program for Wave Hill audiences, The Westerlies present a bold and ferociously unique vision of brass, as works originally written for string quartet, solo piano, and the human voice are reinvented through their kaleidoscopic lens. Original compositions and works from their latest, critically-acclaimed quartet album Wherein Lies the Good are presented alongside a reimagining of Caroline Shaw’s landmark string quartet Entr’acte. Imbued with the spirit of improvisation and a folk-like approachability, Wherein Lies the Good presents The Westerlies at their best, cutting new trails across the vast expanse of the American musical landscape. Selections to be announced from the stage.

Time to get your tickets for the wonderful season ahead!

As stewards of the historic gathering space that is Wollman Rink, we pledge to spark bliss that exhilarates the community’s sense of connection, positivity and possibility. We can’t wait to get this season started!